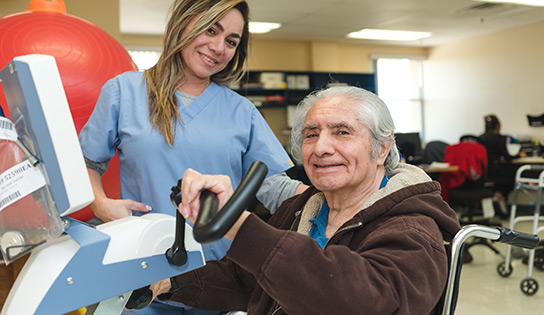 Mr. Reyes arrived at Palmetto Subacute Care Center on August 9th, 2018 after a hospitalization at Jackson Memorial Hospital. He is a 71-year-old patient who was unfortunately involved in a motor vehicle collision. He did not lose consciousness as he thankfully did not hit his head during the accident. He was admitted to a local trauma center, where he presented with a left closed acetabular fracture, left inferior pubic arm fracture, and intrapelvic hematoma. The orthopedic surgeon on staff was consulted for management of the fractures. After a successful procedure, Mr. Reyes was notified that he would need intensive inpatient rehabilitation to support his healing. He and his family were given a list of skilled nursing centers, where they ultimately selected Palmetto Subacute Care Center!

Mr. Reyes was warmly greeted by multiple professionals of the Palmetto team who anticipated his arrival. He was evaluated by both the physical therapy team (PT) and occupational therapy team (OT), and a treatment plan was put in place based on their objective findings. The team also developed a discharge plan and goal in coordination with his care plan.

Mr. Reyes was able to perform bed mobility with maximal assistance and was able to transfer to his bedside chair using a standard walker with maximal assistance, requiring frequent verbal cues to maintain non-weight-bearing (NWB). Mr. Reyes was motivated and willing to participate with therapy. He is currently able to tolerate two hours of activity out of bed. Mr. Reyes benefitted from compressive PT/OT in an acute intensive rehab setting, as opposed to a lower level of care in efforts to improve functional mobility. His goal was to continue intensive therapy in hopes of returning to an independent status and a proper transition back home.

Mr. Reyes was known to be a very cheerful person during his time with therapy. He would even often bring his own music for extra motivation. “I already feel strong and I think it’s time to go home and go back to work,” shared Reyes.

On September 10th, Mr. Reyes was discharged home! After a short two week stint at Palmetto, he regained independent status in transfers. Our social services team here at Palmetto arranged for Mr. Reyes to receive continued clinical care services while home. As he was departing and saying his final goodbyes, Mr. Reyes shared, “I will miss them [the Palmetto team] a lot, and I will come back because truth be told, I felt very good with the care I received from everyone!”